While it is true that Kelly gave me the best gift this year, I’m not entirely sure it tops what I gave myself.

For most of my life, I wished I had a musical ability. I’d love to be a good singer or play an instrument or something. I played the alto saxophone in band in elementary school. I never really liked it. A couple years later my parents offered me actual cash to take piano lessons, and I refused (fyi, I’d totally take that offer NOW, Mom and Dad….). I wish now that I hadn’t refused.

For the past few years I’ve been thinking about the guitar. I’ve never really talked about it much. I mentioned it to Elena. She plays the guitar. I play with hers when it’s out and I’m there. But I don’t know what I’m doing, I don’t know how. I started to think how it would be cool if I learned to play it. Unlike the piano, guitars are portable. I could take it with me to my parent’s house for Christmas and strum carols. Or whatever. I don’t know. It doesn’t really have a purpose, it is just a skill I’d like to have.

Finally, for my 35th birthday, I decided to do it. No more thinking about it. Thinking doesn’t accomplish anything. Eventually you just have to take action.

I called Elena one Saturday afternoon (March 22, one week after my birthday) and asked her if she’d go with me to buy a guitar. She was shocked, to say the least, but rallied and I headed out to pick her up. We drove down to Capitol Guitars in St. Paul. I had researched online and liked them for lessons and they sold new and used guitars.

A nice young man talked me through some different things, because I had zero idea what I was doing. I know nothing about guitars. I didn’t even know how to hold it, for pete’s sake. But he helped and explained. Then, he looked at me and said, “I think that’s your guitar, I’ve got a good vibe about it.” That very nearly sold me. I love things like that and often trust a good vibe or gut reaction. Then he offered a double blind test. I closed my eyes and held one guitar, then it was switched to a different one. The two I was debating between. I got to use senses other than my eyes to see how the guitar felt to me, how it sounded to me. And I chose.

I blindly chose the guitar that gave him a good vibe. It’s as though it was fated. And it is a used guitar, which makes it cheaper, yes, but also gives it some soul. Someone loved it before me and it was used to making music before I came along.

As I was holding it and getting used to the idea and fully committing myself to this massive purchase, I had Elena take a photo of me. 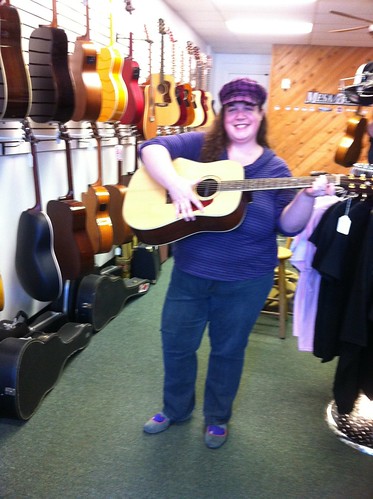 That is the only photo in existence of me with my guitar, who still needs a name.

While I was doing that, the young man went to his computer to research my guitar. When I came to purchase it, he told me that the mother-of-pearl inlay on the fret board of my guitar is in a pattern called the Tree of Life. If I hadn’t been convinced before, this tipped it. The Tree of Life, it’s so poetic and everlasting and beautiful. As it should be.

Capitol Guitars also threw in one free lesson, some free picks, free stickers, and, in my case, a free guitar case. They didn’t have in stock the one they said they would sell me, so they gave me a different one, for free. Very cool, impressed me, for sure.

Last night, April 1, I went back to CG, for my first lesson. My teacher’s name is Joe, and he was kind enough to tell me he is 25….next week. Damn, I’m taking lessons from a kid. But he’s smart and nice, and he’s been playing guitar since he was 7 years old, teaching since he was 16.

I was incredibly nervous for my first lesson. I haven’t had a lesson since God knows when…and I had no idea what to expect. Joe was prepared for my beginner status and started me off with some very very basics. By the time I left, 30 minutes later, I learned three new chords and a strum pattern to practice. I’m actually learning the intro to Every Rose Has It’s Thorn.

Joe was great about explaining things to me and helping me understand, but also at putting me at ease and encouraging me. I liked him a lot, and it sold me on continuing my lessons with him. I go back next week. In the meantime, it’s practice, practice, practice for me. My fingertips on my left hand are numb. Mostly. Not completely. I wish they would go numb completely so they didn’t bug me so much. Guitaring is hard on your fingertips. That’s something I didn’t know.

But I’m learning. And it feels good. I’m excited to go home and practice tonight. Maybe once I learn a whole song I’ll play for you. Hopefully it won’t be too long.

That’s my gift to myself this year. The gift of music and the gift of learning.