Today, today is the birthday of one of my very favorite friends. Happy Birthday, Tommy! My good friend Tom, is 40 years today. When I met him, he was just a lad of 25. He’d only just started dating Mindy (they were still keeping it a secret, I can vividly remember when I found out!), he rented an apartment in St. Paul, he had some roommates, and he was my boss.

I remember him as being the nice one, out of the three interviews I had to be a hostess at Awada’s. He is the one who hired me. We were just kids back then. But he always seemed so much older and more responsible. Probably because he is, he might be the most responsible person I know (sorry, Tommy, but it’s true). 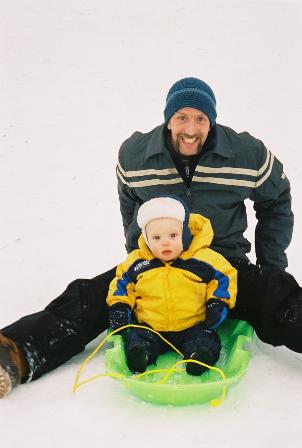 That’s the oldest photo I have of him….digitally. I’ve got older in print! That’s Clayton with him, and Clayton is now 10 years old, so that puts this photo about a decade old.

One of my favorite things about Tom is the way he listens. He’s an excellent listener and he pays attention to the things you tell him. I remember when I was in school, he’d ask me what classes I was taking (people always ask that when you’re in college) and then he’d remember. And weeks later he’d ask how specific classes were going, calling them by name. My parents couldn’t remember the classes I was taking (and I never expected them to) but Tom always did. That amazed me about him, then and now. It’s an incredible skill and, from personal experience, I can say that it truly makes you feel as though the other person cares.

He’s also a sneaky listener. Once Mindy and I became good friends, and she and Tom were dating, we’d sit at the bar at the end of shift, and we’d talk. You know, girl talk. And it was in a loud and crowded bar and he’d be working behind the bar, not paying us the slightest attention, but somehow he always knew what we were talking about. I’m still not convinced he didn’t have microphones installed. 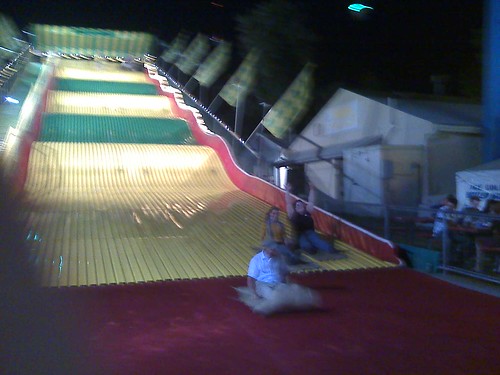 (That’s Tom in front, Mindy in gold, and me with my arms raised. Only people on the giant slide, right before it closed. One of my favorite memories.)

Tom is also one of the handiest people I know. He’s a guy that simply gets things done. I remember one night, working at Awada’s, and I complained that there were no hooks on the bar to hold your purse. Mindy agreed that it was absurd. So I called Tom over and told him we needed hooks. He asked questions to make sure he understood what I was asking (he’s like that, very methodical) and then the next night I came to work and there were hooks. It was incredible. Less than a day. He just got it done, once the problem was brought to his attention. Awada’s no longer exists, but the building and bar are still there…and so are my purse hooks.

I’ve watched him get married, buy a house, become a father – there have been so many changes, but Tom hasn’t changed all that much. He’s kind and steady and just Tom. He doesn’t miss my birthday, ever. He’s a face you’ll always see at my raging parties, or my quieter ones. In fact, one year, he threw a party for me. I was….oh boy, 23? 24? and Mindy was in Europe. Tom decided that because one of my best friends was out of town, he’d throw me a party and he did. I’ve got a million pictures of the night Tom hired out the Awada’s sports shuttle to drive us around, we went to Minneapolis and bar hopped all over the city. I don’t even remember all the bars we went to. But we ended up back at Awada’s and drank after hours until the wee hours. If I didn’t have so many photos, I’d barely remember that night, but I’d always remember how thoughtful it was of him to throw me a party. 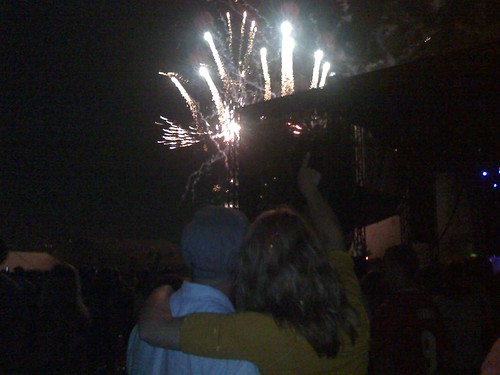 I don’t often stop to write birthday tributes for everyone I know – mostly because this blog would be nothing but birthday tributes, but this year, for his 40th, I wanted to take some time to celebrate my very special friend.

So let’s talk memories. I’ve mentioned a few. Of course the Trip to Chicago, is a big memory. 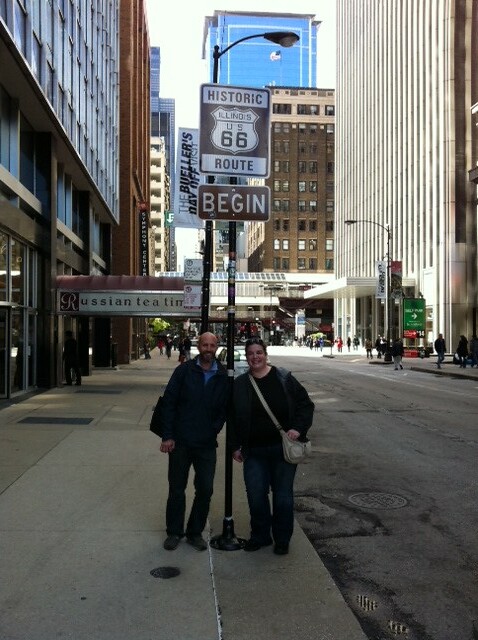 He and I standing at the trailhead for Route 66. And the Hot Beef sandwiches, I’ll never forget, and will always associate with Tom. Also how he plotted and schemed to sneak me onto the tourist bus, and succeeded. I never doubted the success, I can’t imagine Tommy fails at much.

From the wayback machine, I can tell you about the time we were working at Awada’s and somehow became the sponsored bar for a large boxing fight in Oakdale. Unbeknownst to us, which meant hundreds of crazed and partially drunk boxing fans pouring in during happy hour. It was chaos. Barely controlled chaos, until it wasn’t. Suddenly a fight broke out – and all hell broke loose. This is not something words can describe. If you weren’t there, you’d never believe this story. But here’s what I remember. Two burly boxers were going at it on the other side of the bar. They were the epicenter of the storm. Tom was in charge, and without hesitation, he levered up and vaulted over the top of the bar. He waded into the fray without hesitation and I lost sight of him in the throng. The next I saw, he was pinned against the wall, feet dangling as the boxer, presumably, threatened to kill him. Tom calmly talked him down until the guy let him go….and just like that, things dispersed. Though I’m fairly sure Tom’s shirt was a casualty of the evening. 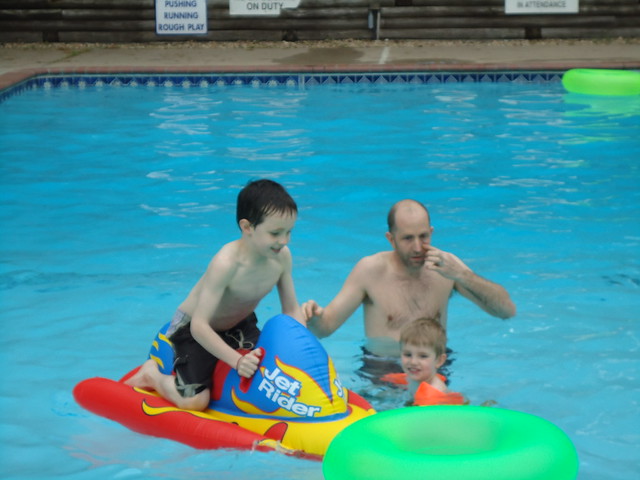 To this day, he stars in one of my favorite photos…. 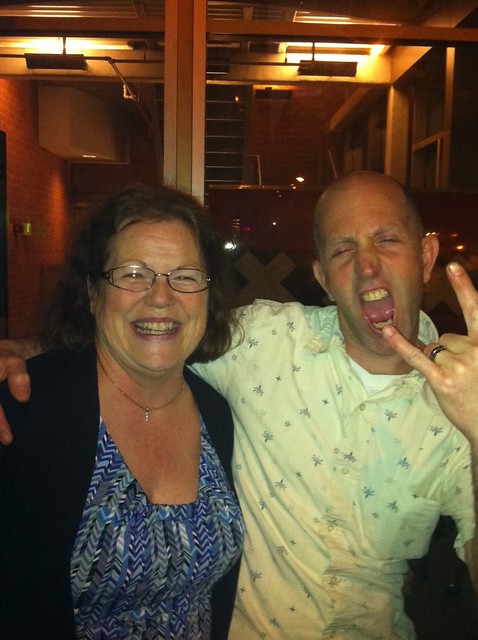 When I turned 30, my mom threw me a murder mystery party. Right from the jump, they had to assign someone to be the moderator, to keep things on track. Guess who that was? 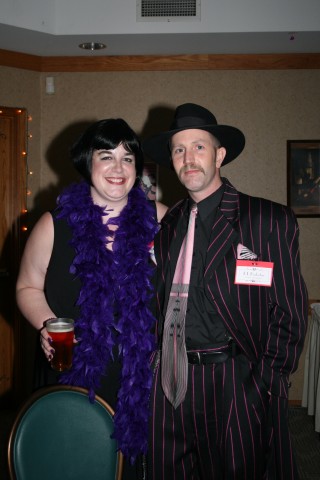 If you guessed Tom, that would be correct. My job was drinking intensely. And I like to think I performed admirably.

You know, if you read this, you’ll see that I describe him as responsible, mature, the kind of guy you can depend on, and all of that is true. But it’s only a snapshot of him personality. He’s also fun, and charming, he’s got a great sense of humor, and sometimes he does dumb guy stuff like camping with guns and booze (a terrific combo). I like him because he’s fun and a good friend, but I admire him for his responsible side. 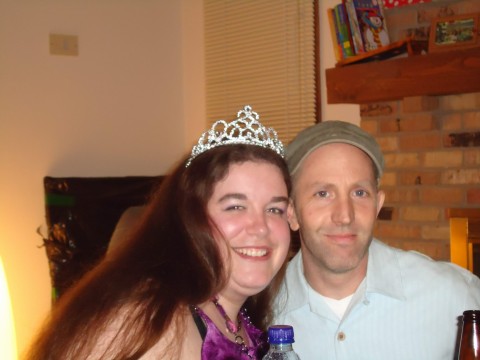 I also think he’s had more hairstyles (if you include facial hair) than anyone I know. It’s a game to figure out what he’ll look like every time I see him.

Sheesh, this is so long. I didn’t intend for it to be this long. I just really love Tom a whole lot and am so grateful for the past 15 years of friendship, and really looking forward to a lifetime’s memories with him and his beautiful family. 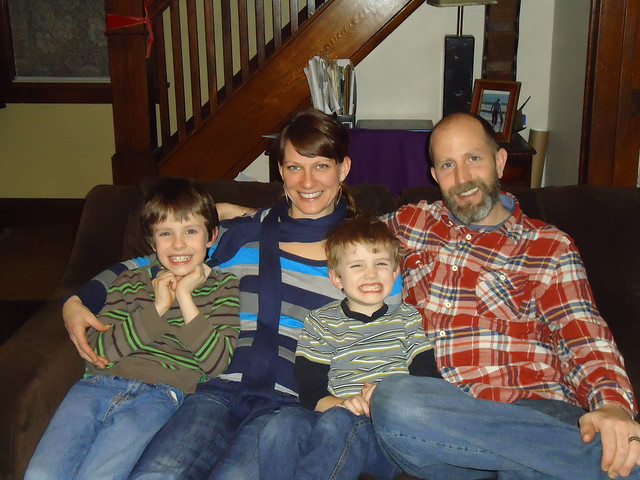 Tommy, happiest birthday to you. I know you don’t really read my blog, so I will email this to you. But I just wanted you to know, especially today, that I am so very thrilled that we are friends.