Do kids still write those in school? As a teacher, it seems like I should know that. So I am going to offer my report of my summer vacation. Warning, this is going to be incredibly long. Scary long, possibly.

My last post was August 20, 2014, nearly one month ago (Edited to add, I’ve since remembered and posted my August Books, so that is no longer true, but when I started *this* post, it was true. Edited again to add, by the time I got permission to post this and got the whole thing written, it’s been a month and I’ve posted several times. But imagine it’s about 6 weeks ago while you read this.). Right after that post, I went to the State Fair with my family and then the next morning we left for the lake, for a long overdue family vacation. We had been planning a week at the lake since about February of 2013.

We arrived on Saturday and spent a couple days just swimming (in a cold lake in cool August weather) and boating and relaxing. It was all beautiful and serene and just what we all needed. Then Tuesday hit and things went all to hell.

About noon on Tuesday, August, 26, my mom went inside to lie down because she suddenly wasn’t feeling well. A few minutes later, she went to the bathroom and broke out in a cold sweat and the shakes. She got a sudden pain in her abdomen and called for my dad. He got her in bed and was tending to her. Everyone knew mom was sick, but we didn’t know the extent. Eventually, my dad came down the stairs and said to me, “your mom needs to go the hospital and she can’t go by car, figure out what to do.” I ended up calling 911. The call was answered in Brainerd (which is Crow Wing County), then I was transferred to Morrisson County. They said they would send an ambulance but a first responder would be on its way. I asked how long and he sidestepped the question. Should’ve been a clue. They also asked us to have someone waiting out front because we were at a resort. So, yes, I stood outside this whole time, just waiting on help for my mom.

My mom was taken by ambulance to St. Gabriel’s hospital in Little Falls, MN, about 45 minutes away from the resort. We waited a bit and then got in the car to head to the hospital and find out what was happening. We were all pretty scared, my mom is not a medical panicker. She is very calm about all things health related, so for her to ask for an ambulance, it meant something was really wrong. 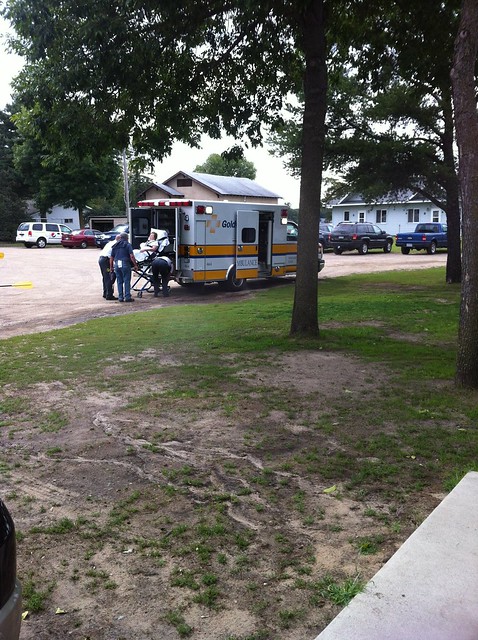 (The moment they put her in the ambulance, one of the scariest moments of my life).

We arrived at the hospital and she was in the ER. Only one of us could see her at a time, so I went in first. I was told that they were assuming appendicitis, and were about to send her in for a CT scan to confirm. We had the kids with us, so we left the hospital and went into town to get dinner. This was Chad’s birthday dinner. Happy 30th, Chaddo. Eventually, my dad called and informed us that it was NOT appendicitis, and they were having a surgeon come to read her scan.

She was diagnosed with diverticulitis. It is, simply, an infection in her colon. She spent the night at St. Gabriel’s and was admitted and moved to a room. We went to see her the next day and spoke with her doctor about moving her. Because we aren’t from that area and we only had two more days at the resort, we wanted her moved home. They said they would arrange for ambulance transport to the hospital of our choosing. I chose United and they had to call and arrange a bed for her and a doctor to accept her. They told us, Wednesday afternoon, that she would end up leaving sometime Thursday afternoon.

She was in a great deal of pain and on a lot of medication at that point, so we all left her there to sleep and went back to the cabin. About an hour later, pretty soon after we got back, the nurse called and told us her transport was accepted and she was leaving that night. They called us at 7pm and she left Little Falls at 9pm. We had just sat down to dinner, so we finished eating and discussed options. It was decided that we would pack up the cabin that night and just drive home at night, rather than waiting for morning. We packed up that cabin in about an hour, it was actually kind of miraculous. We were on the road at 9pm, so about 45 minutes behind her.

We went to United that night to see her get settled. She saw a surgeon the next day and it was decided that she would have laparoscopic surgery on her abdomen to see how extensive the infection was. The hope was that they could do a wash out, to clean out the infection, and avoid a colostomy. Her surgery was scheduled on Friday, August 29. Her doctor said things looked good enough that they ended up only doing the washout, instead of the full colostomy. One of the things they were monitoring was her white blood cell count, which shows infection. A healthy human should be between 4 and 10, her counts were in the high teens at this point. In Little Falls, she was in the low 20s.

They spent several days having her get up and walk, move about, while testing her blood, and pumping her full of antibiotics. She was on an NPO diet, which means nothing by mouth. So, ice chips only. For days, she didn’t have anything to eat. Only ice chips. About Tuesday, a full 8 days of being in the hospital, she started to feel hungry. Her surgeon moved her to a clear liquid diet (chicken broth and jello, basically).

Then we found out, from her doctor, that her WBC was high again, up to 22. That same day, Wednesday, she was not feeling well. Finally, my dad called her doctor at United and they said to bring her in, so back to the ER she went. She had another WBC check that night, and her number was 25, the highest it had ever been. It was supposed to be going DOWN this whole time, but it kept going up, and up a lot. Regardless of the gallons of antibiotics pumping through her system, she was not fighting the infection. They readmitted her that night, Wednesday 9/10, after a measly three days at home.

By Thursday, her WBC was up to 29, and that was it. Her surgeon said they had to go in and fix this thing. She was scheduled for a colostomy later that day. Their initial plan was to enter in laparascopically and see what they could see and try to fix what they could without opening her up, but as soon as they got her in the OR, her surgeon said she knew they had to go in. They did an eight inch incision in the abdomen and removed about one foot of her colon. Apparently her colon was horribly infected, it looked bad even to the surgeon. She was given a colostomy bag, a drainage tube, and because of the infection, they did not close the incision, because it would have become infected (100% chance, said the doctor…and doctors rarely deal in certainty). So she now has three holes in her stomach.

For those who don’t know, a colostomy bag is a drainage bag that is attached to the end of her colon. Her colon is now not connected inside her body, instead one end now comes out through her abdomen, the healthy end, giving the infected end a break, allowing it to heal. Which means that bowel movements now come out through her abdomen and are deposited into the colostomy bag. Got that? Yep, it’s gross, but it is also saving her life, so we deal. She will wear the bag for about six months. We are hoping she will heal faster…but they are estimating six months. At that point, she will have a colonoscopy, to make sure all is healed up, then they will do ANOTHER surgery to reconnect the ends of her colon, allowing her to lose the bag and hopefully be healthy and live a normal life thereafter.

This, the colostomy, is the worst case scenario, and we knew that from the beginning, but as it turned out, this was what was needed to get her back to healthy.

Of course, she is still in the hospital. She needs to heal more, and her WBC needs to be down to reasonable levels before they will let her go home. After home, she will have a home health nurse come out three times a week because she will still have to learn to deal with the colostomy bag, how to change it and care for the ostomy (the colon sticking out of her body), as well as dealing with the 8″ open incision on her stomach. Which requires a VAC pump to help it drain, which needs regular cleaning and disinfecting.

Plus, she needs to get stronger and begin eating more. She’s barely had any food in the last month (almost a month). Here’s to hoping that she’ll go home soon, as of right now, she’s been in the hospital 21 days. I thought 12 was outrageous!

So many people have been kind enough to stop down and visit, send gifts, and, most importantly, send their thoughts and prayers. It’s been wonderful to see the outpouring of love. Turns out, people really like my mom. (Just kidding, I knew that, who is more awesome than her?)

For those who wonder what they can do…nothing. Though I genuinely appreciate the offer. As, I’m sure, does she. The outpouring of love and support we received was generous and wonderful and, as a family, we are all grateful.

And that is that. A super long post about what I did on my summer vacation.

***Edit*** I didn’t have a chance to post this after I finished writing it, so I can give that final update now. Mom has been home for about a month, after a whopping 24 days (in total) in the hospital. She has a nurse that comes to help her out at home, but she’s recovering really nicely. She finally got her VAC taken off and now just keeps her incision clean and changes her colostomy bag. Her energy is surprisingly good for someone only a month post surgery. She still gets tired easily but other than that, she’s really doing great. She has some restrictions on her diet, but they aren’t too terrible and her appetite is back, so she’s able to eat regularly, go on short walks, and generally just keep in improving. My dad even finally went back to work after 7 weeks at home/hospital with mom, so I definitely take that as a sign of improvement.

And what did we learn from all this?

Well, now every member of the family can tell you everything you ever wanted to know about the large intestine. 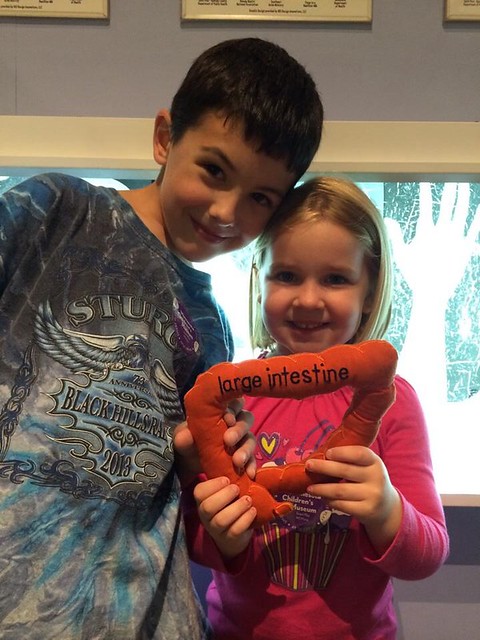 Love you so much mom, and so glad you’re doing better and are practically back to your old self!