I’ve been noticeably absent from the blog for a while. And, as the author, I’m just assuming my absence is notable. At any rate, I want to share this cute story with you.

Last night, I was out with my brother Zack for his birthday. Now, it was way later than I usually stay out and I just wanted to go home, but it was his birthday, so I manned up and decided to go have another drink with him. He chose Demoris. Fine. Haven’t been there in YEARS, but fine by me.

Let’s pause to go back to this weekend. Saturday, I am catching up on email. I get a newsletter from K102 with country updates. I don’t always read it, but this time it said Luke Bryan in the subject line. I love Luke Bryan. Love him out loud. I’ve been saying for a couple years that I’d go see him the next time he came here. Of course, I somehow missed when the tickets went on sale, even though I had it marked on my calendar, and the concert sold out. So I don’t get to see him. Disappointed, but I’ll live.

Anyway, this newsletter was about the upcoming concert. Evidently they’ve partnered up with Miller to do a promotion called Luke-ing for Luke. They’ve put cardboard cutouts of Luke Bryan all over the Twin Cities. If you find one, you take a selfie with it and Tweet it to K102 and then you’re entered in a drawing to win tickets. Now, the newsletter made it sound mysterious, like you had to hunt for these cutouts. I immediately thought it was a cute idea and about 10 years ago, I’d have called up Kelly and we’d have spent a Saturday driving around town hunting down these cutouts. But I don’t do that now.

Back to last night. Zack and I head into Demoris, which is a nondescript sort of place in Oakdale of all cities. We sit at the bar, I just settle on my stool, when I see, across the room, a lifesize cutout of Luke Bryan!

I jumped (okay, not really, the boot doesn’t allow jumping, but I mentally jumped) off my barstool and grabbed Zack’s arm and said “come with me”. I dragged my brother across the bar and gave him my phone and made him take a pic of me with the cutout. “I don’t do that now” apparently doesn’t hold up when I’m faced with the reality of Luke Bryan’s handsome cardboard face. 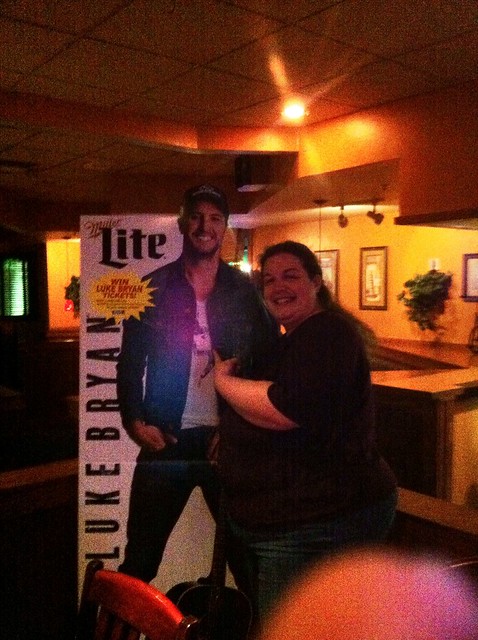 So I explained this to Zack and he said, “so of all the places in the Twin Cities they put one of these at Demoris?” See? We both thought it was weird. I said I guess so and then proceeded to tell the bartender who also had no idea why we were taking pics with a cutout.

Today, I looked up the rules, in order to Tweet it, which I did, and as of this posting, my Tweet is featured on the page (this link here) explaining the rules. I imagine that will be true until someone else Tweets with that hashtag. Turns out that on the website they give a list of all the places you can find a cutout, which was not in the newsletter. I thought it was way more of a contest. But still. If you see one, take your pic with it and Tweet it in. And please take me to the concert if you win.

And that right there is why it is worth it to sometimes say yes when you actually want to say no.