I am very behind on blogging, but I want to commit this before I forget.

Saturday, she and I were playing with an interactive map, she is learning her states. We would select them and then talk about the state, I’d tell her if I’d been there and what I know about it. We got to the state of Oklahoma…

Arionna: Have you been there?

Me: I don’t know, but that is where Christian Kane is from.

Arionna: Oh! That’s your friend, you should go visit him!

Me: I’d really, really like that. (smiling hugely) Do you know who else is from Oklahoma?

Arionna: I know him, he’s on The Voice!

And pop culture wins again. Also, even young children know Christian Kane is my friend. So, there’s a memory I’d love to cherish.

I was cleaning up my email this morning and I saw a folder marked “Arionna”. It seemed weird to me because I couldn’t imagine what I would have in that folder. Turns out, it’s a folder of email pictures from before I started using Flickr.

So there are such gems as:

That’s my darling niece, at one week old. Kind of takes your breath away, doesn’t it? Also, that is the onesie she was wearing during her newborn photos (including the one framed in my house) which must have been this day.

Today, just over four years later, she looks like this:

And she’s still my darling girl. I am so grateful for photographs, it’s amazing to be able to look back and remember.

I have birthday posts coming up for them, but until then, here’s photos of Arionna turning four and Camden, turning one. 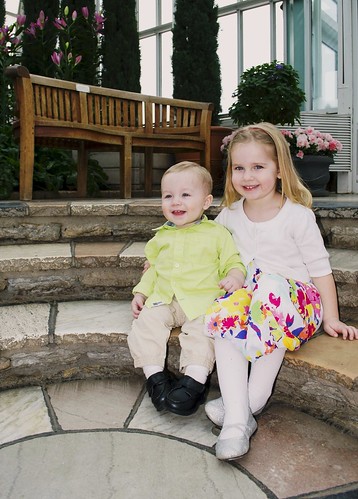 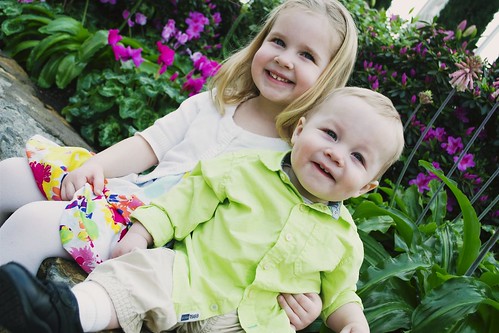 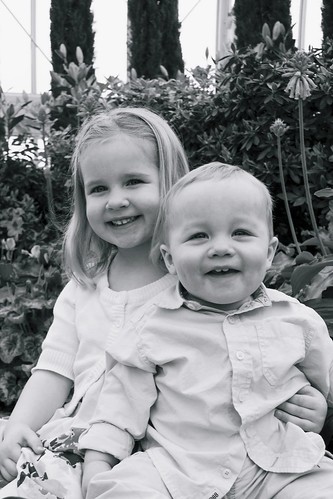 (I included that even though I don’t love the black and white here, the reason to use the conservatory is for the great light and amazing colors, which you lose in BW). 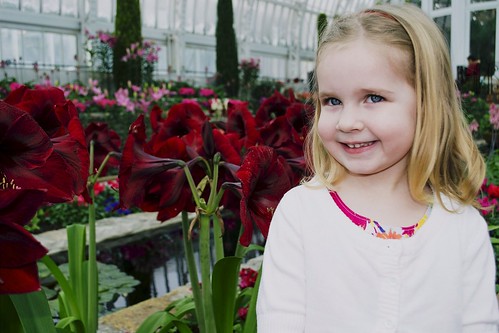 This is a beautiful photo, even though she looks stiff as a board. This other one is better…my favorite of her. 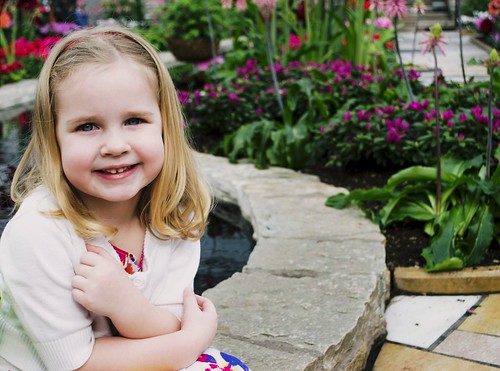 Little guy? Far less cooperative. He would not sit for a picture without Arionna, so there are none of him alone. All the solo shots she had to get by zooming or getting closer to cut out big sis, and he didn’t love that either. 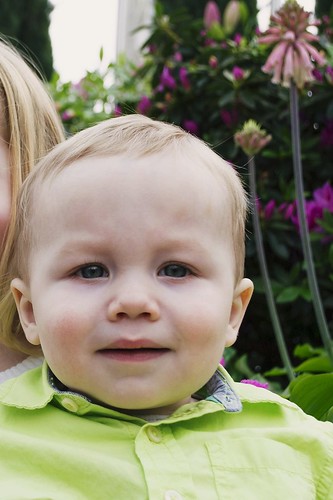 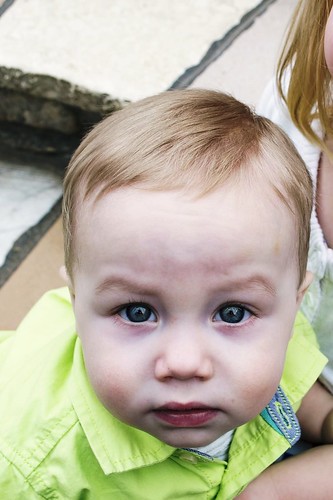 Even though he is not smiling, I do love that pic, I used it in his frame.

This was one of my favorites of the two of them together. 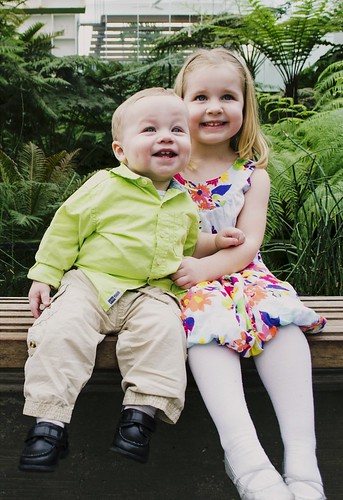 But not my all time favorite, that honor went to this little gem. 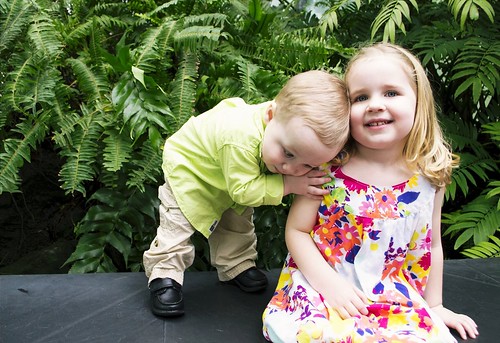 Kierstie was trying to get him standing and her sitting, but right in the middle, he just bent over and put his head on her shoulder, snuggling in. It melts me. Such a perfect capture of their ages. He could care less and she’s still trying to sit and smile like she was supposed to. Four and one.

This will be a blog about the Pilgrims.

Okay, that’s not true. This is about Thanksgiving this year, which was the first for my darling nephew Camden.

Mostly just photos, this was a pretty uneventful Thanksgiving.

And we wanted one good picture of the little guy on his first Thanksgiving.

Very cute, and two seconds later he grabbed the camera. Then he’d crawl away. As a full-fledged crawler, it’s so hard to get him to sit for a photo. Never had this problem with Arionna.
So my sister suggested I hold him.

Again, cute, but not the photo we were looking for.

Well, that’s pretty darling, but a little blurry around the edges.

And after that…I almost stopped. I figured they don’t get much cuter than that. But he was suddenly being cooperative, so…

Oh my. Holding the orange pumpkin and sitting and smiling? Yep, that’s the money shot. Such a cutie.

He was a HUGE fan of Thanksgiving dinner. He ate everything we put in front of him, didn’t flinch. The boy loves to eat. He just loves food…so long as he can feed himself. He just kept shoveling it in, over and over.

Later, Arionna made a Christmas Countdown Chain with Grandma and Uncle Zack. She gets so excited each morning to wake up and tear off the ring, getting her one day closer to Christmas.
Finally, just before Simon arrived and chaos ensued, we wanted one nice picture of Cam with his GiGi. We have a couple pics, but nothing really nice.

I definitely think that qualifies. Even she is slightly smiling.
I hope your Thanksgiving was beautiful and that you were grateful for the things you have. I’m grateful, among other things, for you, my wonderful blog readers.
Happy Thanksgiving!

Back in 2010, my sweet Arionna was celebrating her first Halloween. She was seven months old.

That was her little “costume” and I took a bunch of photos with her, many of her holding that pumpkin. She was singularly uncoopertive. Rarely smiled at the camera. But, regardless, these are my memories of her first Halloween and how cute she was.

Here’s the blog post from that Halloween. I did post a bunch, because of the first, and also because I bought her that little outfit.
This year, in 2013, as Camden celebrated his first Halloween, Emily mentioned she still had the jammies, and since they are roughly the same size/age, I was so excited to replicate that moment.
Here is Cam, at 8.5 months, on his first Halloween. This was AFTER trick-or-treating, so by all accounts he should have been tired and cranky…

Instead, he was happy as could be, and totally willing to let me put that pumpkin on his lap. (His hair was that crazy because we made him wear a hat for trick-or-treating…)

Eventually, he did grow bored and toss the pumpkin, heading straight for the camera….

And still so cute!
I’m delighted that these two could BOTH wear that little Halloween outfit and that I got to see them both. About as cute as little bats (and I kind of wish we had saved the little bat that Simon made from Arionna’s pictures!)
I wonder if she still has the same Thanksgiving outfit….

Anyway, I just wanted to get this up before, you know, Thanksgiving is here. I finally uploaded the photos. Mostly just pictures….

Our whole crew. Obviously we had a theme going…based on what Arionna chose for her costume.

My sister’s cute family. For those wondering, Chad was the wizard. No, I don’t understand the creepy mask either.

The witch was really going after that dog….

Little man from the Lollipop guild. The lollipop was actually too heavy for him to hold….but he looked so cute.

Warm in his stroller, but still holding his GIANT bucket.

My favorite picture of my little witch.

Okay, maybe THAT is my favorite picture.

Though that one is pretty cute, too!

Okay, maybe THAT’s my favorite (even though the camera was foggy from coming in from outside!)
We didn’t take a ton of pictures, but the ones we did take were pretty cute. It was a fun Halloween and a good way to cap off October. November has so far kicked my a$$…so this feels nostalgic at this point.

Little kids are notorious for selfies. Give one a camera and they will, invariably, take a cheesy photo of themselves.

A few weeks back, Simon was visiting and he picked up my camera. He’s always had an abiding interest, I probably have a hundred Simon-selfies.

True to form, he first flashed the camera his mug:

Then again, with a bit more fervor:

At this point he turned the camera on me:

(Arionna had given me the dolly and told us both to take a nap)
Then he was after Arionna:

She was harder to capture, but he was persistent.

Very persistent.
And then he turned the lens back on himself. I took the opportunity to interject, “you know if you’re going to take pictures of yourself, you could at least smile and look handsome in it.”

Well, how about that.
Then he drifted away with my camera, out of my sight. He was gone for a bit, but I wasn’t worried. There’s not too much he can get into.
A few minutes later, he came back, giggling like a maniac. Immediately suspicious, I asked, “what did you do?”
He laughed out loud and handed me the camera.

“I took a picture of my BUTT!” His glee was uncontrollable. Arionna heard and ran over to see. She was laughing like a loon as well. I’ll admit, I laughed. How do you not? He bent like a pretzel, and took several tries to figure out a way to take his first ever butt-selfie.
Then, sweet little Arionna turned to her cousin and said, “DO MINE!” and turned her back. Which is exactly how we ended up with….

Ah, kids. Wacky and priceless. But someday, I’ll get to torment them with the story of the butt-selfies!

Livlife
Create a free website or blog at WordPress.com.