Yep, five separate posts just to detail all my celebrations. Anyone else think I’m a little overboard? No? Me neither.

The festivities came to a close on the night of my actual birthday. I had sent an email to all my friends, asking them to meet me out for drinks at RayJs. RayJs used to be my bar, but I so rarely go out anymore that it has now become a thrill. My sister took care of reserving tables for us, right in the party area, near the dartboards. And she decorated with balloons.

My family was there, Kelly and Mark, Elena (my chauffeur), Niki, Frodo, and the Amys. It was a great turnout. Most of the rest of this post will be photo heavy. 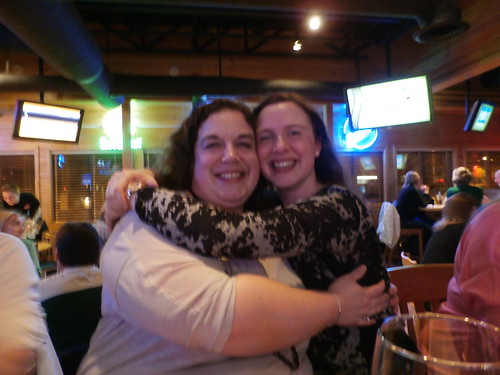 Me with my sister. 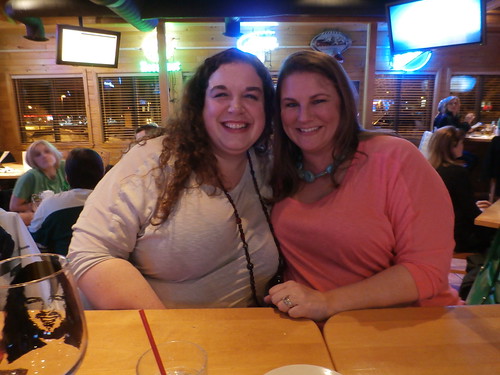 Kelly and me, wearing the same shirt. 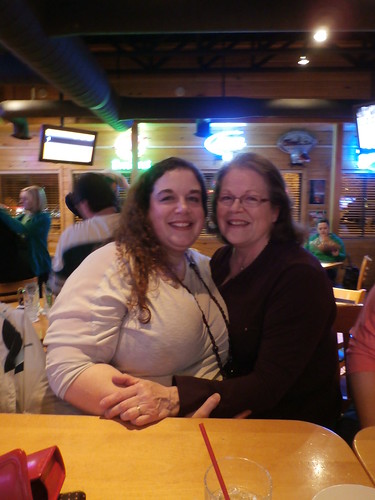 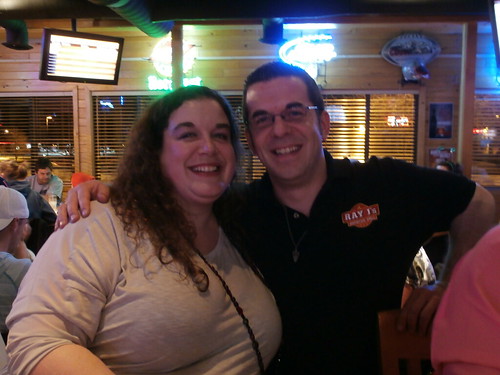 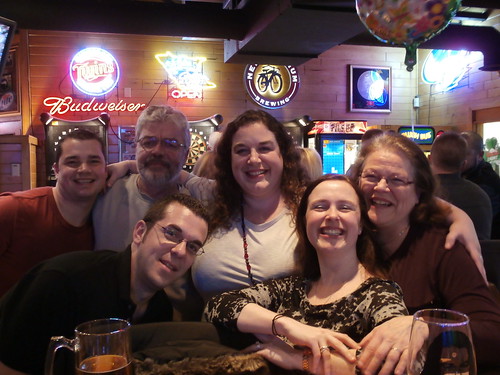 Family photo. I do love this. We don’t do these nearly often enough. So thank you to whomever suggested it (Kel, was it you? I think you took the photo…but I don’t remember, actually). 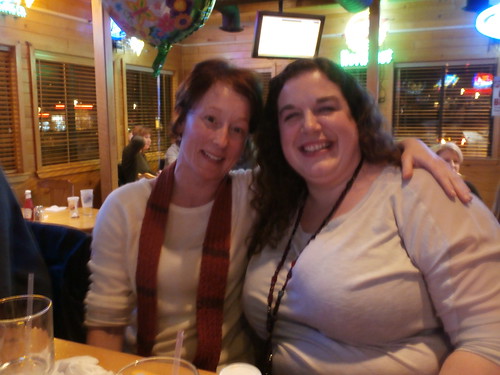 Lane and me. (And yes, many of these seem a little blurry, the lighting in there is horrible for photos, plus my new camera is a lot harder to use than my old one). 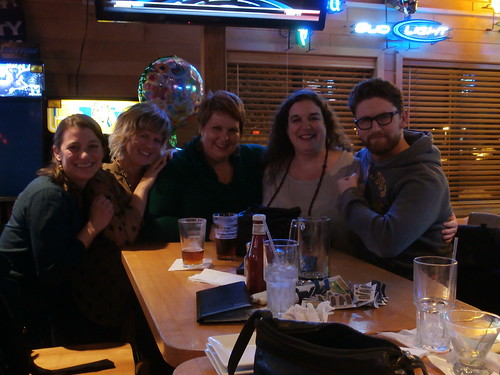 Ooh, how I love this photo. From L-R Niki, Amy Blonde, Amy Red, Me, Frodo. My GW peeps.

This was so dorky/cute. I was sitting at the table and my dad came up and put his arm around my mom and then HE said, “take a picture of us”. He NEVER says that. That could possibly have been the first time in his 60 years he has ever said that. So, I did and he dorked out, as usual. 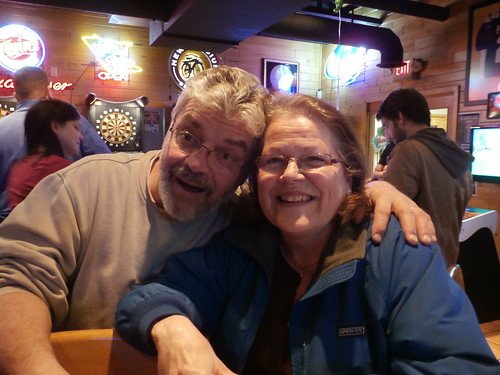 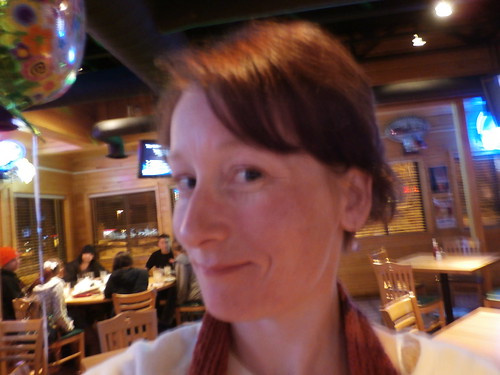 Elena took a selfie, which cracked me up. Still does, actually. When I was uploading, I didn’t remember she did that and I laughed out loud. 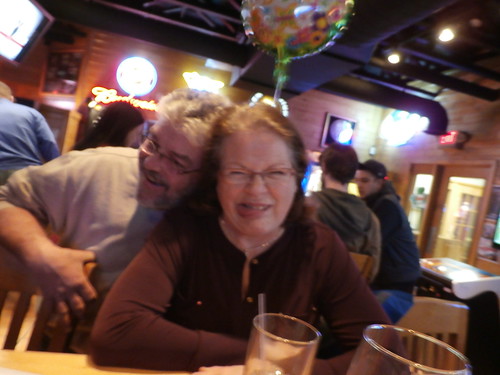 Yet another shot of the people whose job it was to turn me into adult. Explains a lot, right? 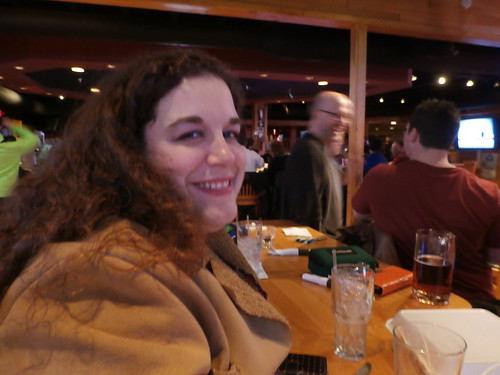 I think Lane took this. Wow, I look drunk there. I was, I assume, but I really look it.

My mom, with me and Kel, I really like this shot, too. It’s so cute. The last one of the three of us I believe was at my 30th. 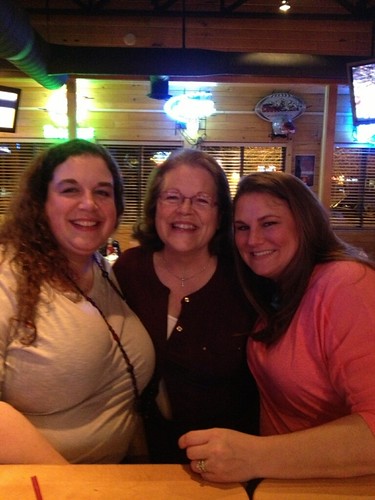 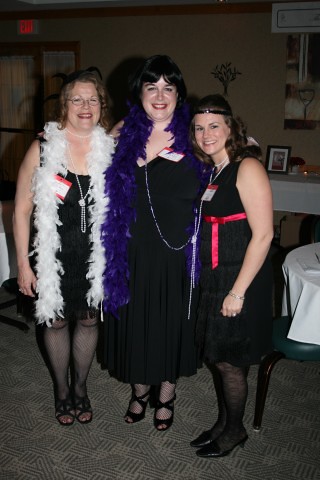 And we end with the greatest gift of all. Kelly was the big winner this year, which is saying something because I got some seriously amazing gifts this year. But I actually gasped so loud in the busy, loud, crowded restaurant, that strangers were turning around to see what happened. True story.

I still get giddy when I look at this. 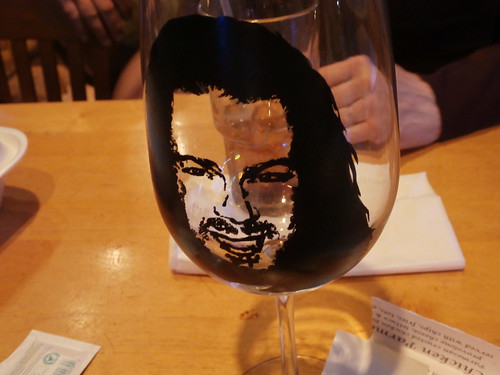 Yes, it’s true, she got me a wine glass etched with Christian Kane’s FACE. I’m blown away. She and I might have to start a no gift policy because I don’t know how she will ever top this. Unless she actually gets me Christian Kane. Hmm…maybe we’ll keep the gifts in place, just in case. Also, I swore there was a picture of her and I where I was holding up the glass so you could see it, but I can’t find it. Anyone have it on a cell phone maybe?

And that’s all she wrote. Weeks of celebrating, ushering me into the back half of my 30s. Thank you so much to all my friends and family who turned out to celebrate with me. Love you all more than I could possibly express. And I’m pretty good with words.

Oh, and Mark, I did kick your ass at trivia. Deal with it.

This post is a couple weeks behind (which is nothing, I’ve got three posts from last SUMMER I’ve not done yet) but Elena has commented on the pics in the new header, so I figured I better get to it.

Elena and I had our date night on Feb. 18th I think. She picked me up and we went to a movie. We saw The Vow. Which was pretty much all-around bad. I was sad about it because I was in the mood for a good, heart-wrenching, movie. Not so much. Plus, I adore Rachel McAdams and I really like Channing Tatum, but together….pfft.

Afterward, we went to Ray Js. I haven’t been there in AGES. She and I grabbed seats at the bar and had a drink. Then two because the manager bought us one. We ordered apps and noshed. She started playing with my phone, which is fine with me, but then she was texting people. I have no problem with this in principle, until:

It’s Justin. I’m a little surprised, but not overly. I run into the lobby to answer (it’s loud in there) and as I say hello, he said “and a big kiss right back at you” Hmm, I thought, that’s pretty weird. “Thank you, why are you giving me metaphorical kisses?”

No lie, that is how our conversation started.

Eventually, it came out that I text him something resembling a kissing noise. Hold on, I’m checking the phone to replicate this exactly. “Mwah!” that’s what it said. I figured it out and, laughing, explained to him that Elena was the one sending him kisses, not me. Finding out that we were out on the town, he said he’d love to stop for a beer. He was on his way home and about to drive right past us.

Less than 10 minutes later, our date night was suddenly a three-way. (That sounds WAY dirtier than it was). We drank and hung out. Justin’s parents are vacationing in Hawaii and he is house/dog sitting for them. It is funny, because it is HIS dog. But when he moved back from Colorado, he lived with his parents and Corona did, too. When he bought his house, it had no fence (still doesn’t) so he couldn’t take her, plus his mom got super attached, so Corona lives with them permanently. So Justin was dog sitting his own dog. But, when he and I first met, we used to hang out at his folks house, so it was nostalgic when he invited us over at bar close. Elena drove us over and we hung out. We reaffirmed that Corona does NOT like me. I am one of only two people she has ever nipped at.

Elena, however, made a new best friend.

The cat, who actually does like me, is Sammy, and was jealous over all the attention Corona was getting.

While hanging out, we went total high school and dug into the ‘rents liquor cabinet. We pulled out every weird thing we could find and mixed up some concoctions. Actually, I think Justin made a White Russian. We also had a an Irish Whiskey blind tasting. Dorks. But then, Justin brought in a gift he got at work. An amplifier/sound machine thingy. Clearly, I’m up on the lingo. But you can plug an iPhone into it and play music then use the microphone to sing along. Man do I need one of these at my house! I sing into my hairbrush and water bottles all the time, not the same effect at all. Give me a microphone!

I was just drunk enough to actually sing. We were picking songs and singing like maniacs. Duets. Trios. Rounds. You name it. We really rocked some. Of course, I can’t actually remember which ones. I think we did “Every Rose Has Its Thorn” I vaguely recall. I’m also pretty sure Justin had me singing the Foo Fighters at one point, but I’m actively trying to forget that.

Then, in one of those weird turns only super-fun nights can take, Elena picked up Justin’s tie off the counter and was playing with it. She put it around her neck and then it came out that she has no idea how to tie a tie. I told her my grandpa Conway (my mom’s dad) taught me how when I was a girl. I can’t remember why, but I was staying at his house overnight and it came up and he said I should know how. So he taught me, I never forgot, and it has come in handy more times than I can count. Including the 8th grade when I went through a weird phase and wore ties all the time (because I’m Diane Keaton?).

At any rate, I tried showing her, but I was drunk-ish and it was not coming out clear, at all. So Justin stepped in. Because he was so sober. At any rate, it was so cute, him showing her, I took a picture.

Then, into the bathroom, to really learn.

I know you can’t see the tie, but, trust me, that is what they are doing. How cute is that? Is it cuter if I tell you it was about 5 am when this was going down? Maybe not.

Then, we had to get going, because I needed sleep for my delirium and Elena still had to drive me home before she got to go beddibye. Before the night ended, though, I wanted a date night photo.

Isn’t that adorable? Like a Justin sandwich. So cute.

Then, Elena grabbed my phone and said she wanted one of us. Fine by me, I’m always up for pics with my friends.

How fantastic is that? My new favorite pic of him and I. Mostly because we match. And because I know it is the countertop I’m hanging onto and Justin that are keeping me upright. And it was after 5am and he still has a beer, because he’s a rockstar. And that is one of the new pics on my blog header, if it looks familiar. I wish I had thought (like thinking was an option) to get one of me and Lane. Next time. Next date. Also on my birthday, which is exactly 10 days away (still plenty of time for gift shopping!)

All in all, it was a terrifantastic date night. One for the record books. Thanks, friends!