I’m doing this because Elena asked me to.

I wrote her a story, which I will not tell here, because it is long. To summarize, I used my innate powers to will a song to play on my iPhone. True story.

She said that my magic finally kicked in at 34. I’m all “cool”. (Because I’m very casual about magic).

Then I said that maybe Dean Winchester will come and try to kill me now. Dean Winchester, for those not in the know, is the main character on Supernatural, my favorite television show. He, along with his brother Sam, hunt supernatural beings that are evil and the kill them.

Elena said Dean would not try to kill me.

I WANT Dean to try to kill me. It’d be all dramatic. And I’d outsmart him. But only for a minute, because he’s freaking smart, and then he’d come after me again, but then I’d convince him that I’m good and would never use my magic for evil. And he’d still want to kill me. But them Sam would show up and actually almost kill me. But Dean would SAVE me, because he knows I’m not evil. And they’d have a heart to heart about it, right there in my living room. I’d get to watch.

Dean would do the single tear. Sam would stand there, looking awkward, but then he’d turn on the puppy dog eyes and he and Dean would hug. Then they’d decide to let me live. THEN, they’d start calling me for help. Like if they can’f figure out a spell or they’re just stumped. They’d call me, because they know I’m good AND powerful and I’d be their new ally.

It’ll be great. And SPN S9 will be all about them hunting with their magic friend Olivia.

Do not spoil my joy.

And she laughed, and told me to write this on my blog to allow others to share the wonder and the crazy that is my brain. I figured “why not”.

Because, it’s not like anyone will dare make fun of me.

I could kill you with my mind.

But then Dean would actually kill me. So that would be bad. Fine. I won’t hurt people. But that won’t stop me from giving you a flat tire and making you late for work and then getting a cracked windshield and then burning your dinner and then getting a zit on the day of the big presentation and then dropping a pencil and bending over to retreive it, only to have your pants split down the middle.

I will not hurt anyone, but I will be the biggest pest alive, if you’re mean to me.

And for Heaven’s sake, do not spoil my joy. I’m magic now.

Yet another influencing teacher on my list. I’m a lucky girl to have had so many. My first class with you was completely coincidence. I had no idea who you were. Certainly not that you were the director of the Fairfax library system. I remember the first paper I wrote for you. It was dry and full of fact and properly cited. I got a B, but you wrote a comment back to me that it didn’t sound like the student you knew from class. It was a B, because you rarely gave As. You said that an A meant excellence, and unless a paper truly was, you wouldn’t give the grade. It wasn’t just about the numbers.

That stuck with me. I had gone in thinking that grad school was so serious that I was focused on that when writing a paper. It had served me well, my grades were strong, but I wasn’t really having fun. I wanted excellence, yes, but more than that, I wanted it to be on my own terms. It didn’t matter if I got straight As if it was all about the numbers.

So my next paper for you, I read the question posed. I actually, instinctively, disagreed with your premise. I could have written the paper, done as you requested, but it wasn’t me. I, instead, wrote my paper. I disagreed with your premise and then backed it up. I put my own spin on it. When I submitted it, I was so nervous. I didn’t actually answer the question you had asked. For a whole week I was nervous. Then, the paper came back.

You gave me an A.

It was the first one you gave out in that class. You called me out in the class and explained why I got that A. Because I didn’t just mindlessly answer that question, instead, I thought about it and answered the idea. That was a defining moment for me. I realized that it was better to be true to myself and be all alone than to just follow the crowd and be accepted.

Obviously you know that I took every class you taught. I was in them all. And I got As in them all. I worked for them, I fought for them, but when I look back on grad school, the classes where I learned the most were all yours. Most of the rest of the courses are blurs, just so much information thrown at me. But I remember what I learned from you. I remember you.

Perhaps one of my biggest regrets in life (and this is from someone who doesn’t believe in regret) is that I didn’t take you up on your offer to move to Virginia and work for you. I wanted to work in a public library – I still do, 8 years later – and you could have given me that opportunity. Moreover, you would have kept teaching me. There was so much more than I could have learned from you. We still keep in touch, though sporadically, and I think of you whenever I see someone going against the grain, or looking at librarianship in a new way, or when an Elvis song comes on.

As a matter of fact, here, a gift to one of my favorite teachers. 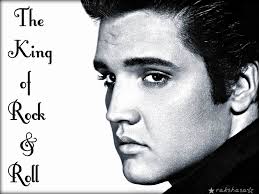 For those who are reading this who don’t know you? Sam loves Elvis. His first words to any class he teaches are that he believes that Elvis lives and he gives extra credit for Elvis sightings.

Thanks Sam, for helping me become a square peg in a world of round holes.

Thank you for being part of my life,

(to see why I am doing this, read here)